Construction sector performance according to Euroconstruct

Construction sector performance according to Euroconstruct

Total construction output in the Euroconstruct area grew by 3.1% in 2018, and so slightly better than expected six months ago. On the other hand, the outlook for the forecast period up to 2021 shows an even slower development, in a context of a weakening economic expansion. New construction continues to be the leading force of the expansionary cycle (+4.3% in 2018, resulting in an overall cumulated increase by 17.5% compared to 2014), with new civil engineering approaching a 6% annual growth.

2017 was the year with the best construction development in the EC-19 region during this recent economic recovery. At that time the strongest annual increase for more than 20 years (+4.2%) could be observed. In 2018 the first signals of a new slowdown appeared in some regions (like in UK and several Nordic countries) where production growth in some areas stopped.

Nevertheless, total construction output in 2018 increased and summed up to a total volume of 1,610 billion Euro in the Euroconstruct region. After five years of continuous growth it is still far below peak level, with significant different regional dynamics. Seven countries already exceeded pre-crisis levels, six others had in 2018 the same market capacity as in 2007, while the remaining six, including three of the five major countries, still have a negative gap of more than 10% that has to be filled. 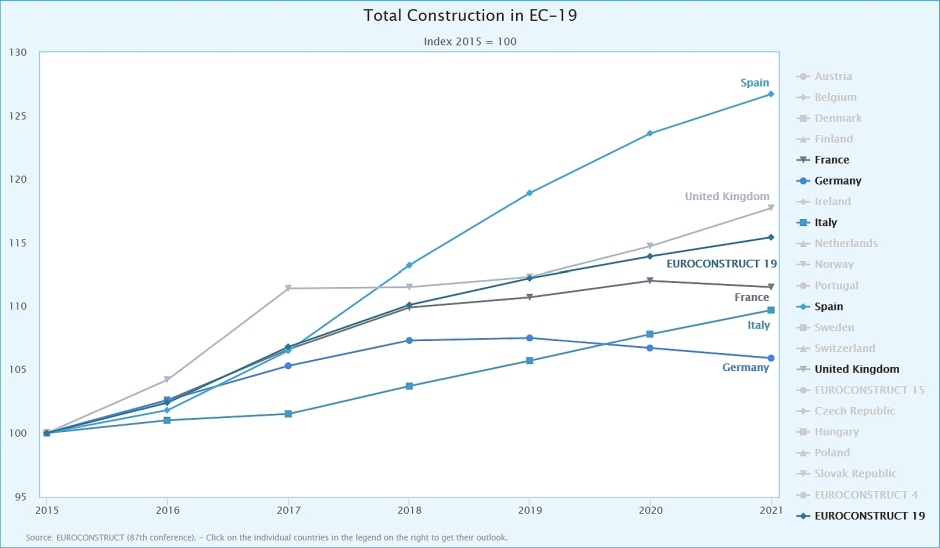 The new short term outlook defines a slowing and more moderate growth path: European construction output is forecasted to increase by less than 2% in 2019, and by less than 1.5 percentage points within the next two-year period. Some of the downward risks already materialised since the autumn conference, adding elements of concerns and uncertainty to an overall scenario characterised by structural factors, like demographic pressure, market saturation, a slow realisation process among other bottlenecks.

The leading market in the next three year period will be infrastructure. It is expected to sustain the European construction market with an average annual growth of more than 3%, compared to weaker performing building sector (+1%).  At country level, the positive development will be sustained by strong growth of about +6% in Eastern European countries, except in Slovakia. A similar strong increase is forecasted for Ireland, even if the trend is decelerating within the forecast period. A more moderate progress is forecasted in countries like Netherlands, Portugal and Spain with growth rates close to 4%. The latter is the best performing one among the big five countries. Germany and France face in opposite to that a stagnating construction market, while in UK and Italy an increase in output by less than 2% on average is likely. 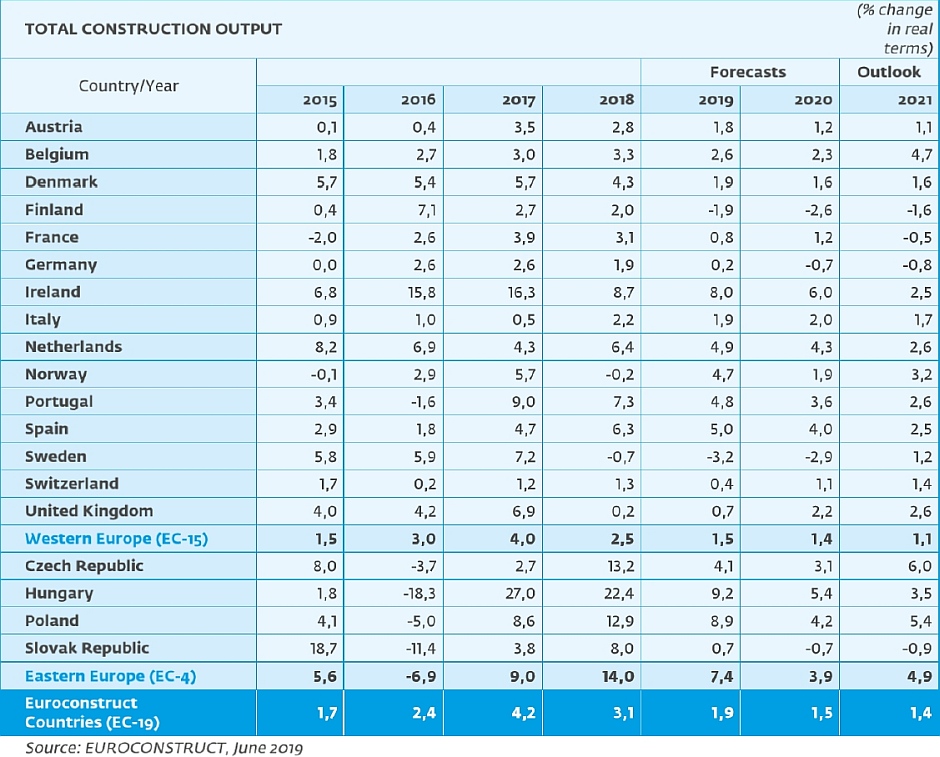 Do you want to be informed? Indicate your work e-mail and the category that best describes your interests