The EKU Perfektion systems have contributed to the modern style and very low energy consumption of two private villas in the province of Treviso. The Eku Perfektion Slide systems with minimal sliding doors stand out for their aesthetics and constructive refinement.

Modern design characterized by large glazed areas, refined solutions and minimum energy consumption, this is how we can best summarize the characteristics of two private villas built in the province of Treviso. 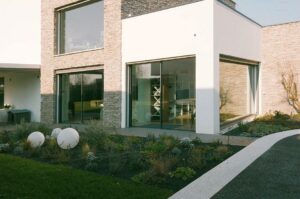 The surveyor Mauro Barbon, who was in charge of the project and the site manager, explains the details of the intervention, “the intervention was carried out on an already built area that had been cleared and freed of the previous building.

We then proceeded with an insulating jet in the ventilated crawl space of the foundations. The supporting structure was in X-Lam wood, covered externally with an insulating coating of wooden fibre and rock wool and internally with plasterboard. Sheet roofing was made on one villa and flat tiling was used on the other. Both buildings were without roofing protrusions, rainwater being directed and collected in special tanks.

Without a doubt the most visible elements are the large terraces and glazed areas. Moreover, the construction technique, the materials chosen, the use of photovoltaic technology and high efficiency heating systems have made it possible to classify the two villas in Class A4, thus respecting the requests of the client”. 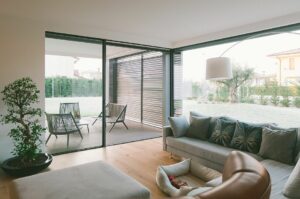 EKU Perfektion systems, Alu and Slide models were used to build all the windows and doors of the two villas. Their production and installation were carried out by the company Ser Lux of Maserada (TV), which also dealt with the assembly of all the retractable sunscreens, the filtering and blackout blinds and the bioclimatic Pompeian.

“The EKU systems were in competition with other solutions,” said Ivano Bigaran, owner of Ser Lux, “but when the client saw the Perfektion line in our showroom they immediately fell in love with it.

The winning factors were the general aesthetic aspect, the finishing -a cast iron colour that was chosen for all the windows and doors in both villas- and the minimalist style, especially the design of the Eku Perfektion Slide sliding doors.

In my opinion, in fact, a “true” minimalist style is when the perimeter frame of the sliding door is recessed into the wall both internally and externally and the sliding door disappears inside the wall itself. In this way, an effect is obtained which, in addition to enhancing the glazed area, creates an unparalleled fusion between the internal and external environment, a sensation impossible to obtain with other technical solutions. 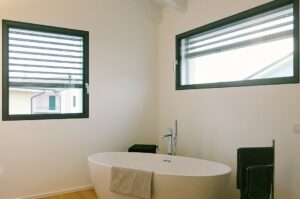 2 large fixed windows were installed near the stairwells, one 5.50m high and 2.70m long, the other with the same length but 4.90 m high.

Finally, 20 windows and French windows of the EKU Perfektion Alu series were installed.
In order for the buildings to obtain Energy Class A4, all the windows and doors were equipped with high performing double-glazing.

The large glazed areas instead have 8+8 self-cleaning tempered glass externally, a 20mm central chamber with argon gas and warm edge and low-emission 5+5 glass internally. “Even if the project did not require any particular acoustic performance, with these systems of double glazing the doors and windows achieve high acoustic insulation values“, explains Ivano Bigaran.

At the entrance a unique glass structure 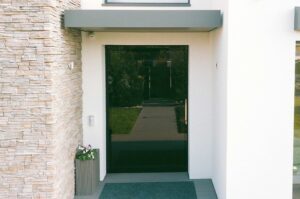 At the entrance of one of the villas, it is possible to admire an original all-glass structure, designed by Ser Lux. “We have been designing these unique constructions for 4 to 5 years now, it has a very particular style which, however, works and pleases thanks to its attractive design”.

It is an all-glass pivot window (2.75m high by 1.65m wide), glazing composed of a triple central chamber with 8mm tempered glass coupled with 6mm smoked glass both inside and outside, the final effect is that of an elegant burnished screen.

“The glass maker supplies the glass already prepared, including a recess where the door frame is inserted with its relative hardware, lock etc. and structural sealing, with structural silicone we mask the entire profile around the perimeter so that only the glass is visible. It is a unique design, which can also be made in a more traditional version with blind panelling, as was done for the second villa”.

“The installation was undoubtedly the most delicate aspect for two reasons” explains Ivano Bigaran, “the first was connected to the considerable weight of the glassing used. The sliding retractable windows and door that exceed 4m and weigh almost 500kg, is a value almost at the limit for the window carriage mechanisms. The largest fixed window weighs circa 950kg and to install it a crane had to be used with a 30m long arm. These factors illustrate only a part of the complexity that we had to face.

The second reason regards the fact that all the windows and doors were mounted in counter-frame systems produced and installed by third parties. The excellent final result is due to the intense collaboration with the manufacturer of the systems, which had to build them according to our needs as well as the synergy with the company that took care of the plasterboard finishing, an aspect that has to be carried out perfectly to avoid that cracks or small cracks appear around the windows. Hard and complex work, but in the end the full satisfaction of the client was our reward”.