Refurbishment of a school complex

Renovation and extension of the school complex in Crocetta del Montello, Treviso

The project aimed to improve student comfort by creating a harmonious relationship between the new and existing works. The extension of the school complex communicates with the external space thanks also to the large windows created with the EKU 50 Glass façade system. EKU systems were additionally adopted for external and internal doorways, namely the EKU 66 TT and EKU Door.

Carrying out an important didactic function, enriching children’s quality of life, was the fil rouge of operations to define the new primary and secondary school complex of Crocetta del Montello (TV), within the historic Villa Marcato-Ancillotto. Completed in March 2014, the works involved the renovation of the rooms on the ground floor and the first-floor portion of the what was once a spinning mill, along with the construction of an expanding space containing the new classrooms of the primary school, overlooking the park of the estate, in addition to the new primary school entrance area.
The goal was to create a single school complex, to be utilised as a primary school for the entire municipal area, unifying the autonomous complexes of the hamlets of Crocetta del Montello, Nogarè and Ciano del Montello, in anticipation of their shutdown, together with the redefinition of certain areas of the Grade I secondary school, already historically established in the Villa Ancillotto complex. The operation confirmed the important cultural, sporting and recreational role of the 19th-century villa and of the former spinning mill, a hub that houses “La Terra e l’Uomo” Civic Museum with prestigious palaeontology and archaeological collections, the civic municipal library and secondary schools and which now, having been reorganised in the secondary area of the ex-spinning mill and expanded towards the existing gymnasium, offers a unitary frontal perspective opening up towards the extensive green spaces of the historic park.

Hallmarks of the school complex

Through glimpses of the lawn and the expansive windows that characterise all of the spaces of the building undergoing expansion, the new school communicates with the external environment in which it is positioned. Indeed, the outdoor spaces have undergone a careful and calibrated design that has utilised greenery as an element that organises the space, as an educational tool and a stimulus for socialisation for the children. There is a vegetable patch towards the park, for example, that allows children to carry out various activities and enjoy new sensory experiences. The spaces are set out through sequences of external covered environments and internal areas that allow the child to interact and identify with their surrounds.
The school was equipped with an artificial air exchange system, radiant floor system, heat pump, air renewal and thermodynamic recovery unit, a green roof, an automation system, dimmable lights, external sunshades, a brise-soleil system facing south and east along with windows and façades with high thermal insulation, thanks to which the new extension has obtained a Class A rating for energy efficiency. 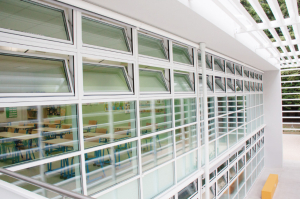 The works have redeveloped and made usable the entire ground floor of the ex-spinning mill, laying the foundations for the seismic improvement of the entire building so as to adapt the structure to current legislation. Significant consolidation operations were carried out on all existing walls. The entire pavement of the ground floor was demolished, with new foundations being created along with a ventilated and insulated floor, thus guaranteeing environments that are safe, protected against radon gas, and comfortable.
The existing building was isolated through the construction of internal plasterboard walls, interposed with acoustic and thermal insulation, on all outer walls of the building. The old windows were also removed and replaced with new thermal break fixtures.
Used for the passageways, including those installed on the escape routes, was the EKU 66 TT system, allowing for the construction of doors with internal or external openings, a crash bar and coplanar surfaces on both sides. The geometry of the profiles and the use of high-quality components guarantee great sturdiness for the structure whilst also meeting the most strict demands in terms of energy savings. Also for the internal doors, the choice fell to an EKU solution, being the EKU Door series with a clean, linear and appealing aesthetic.

A new extension to the school complex

The new entrance, which extends across a single level, acts as a link between the gym and the primary school, as the filter between the outside and the classrooms. From the entrance, it is possible to appreciate the alternation of external environments, protected and defined by the vegetation of the project, and the internal environments that extend outwards.
The roof was made with an exposed wood to provide students with a warm, familiar and welcoming environment. The edifice containing the classrooms has a structure of reinforced concrete walls and slabs with porous brickwork infill.
The rooms are defined by the presence of natural light, screened by external motorised blinds and a pre-painted galvanised steel brise-soleil system that extends across the entire south side of the building up to the gym. Its function is threefold:

The two buildings subject to the extension of the school complex are characterised by full-height glass façades with secured parts that can be opened with transoms. Thus, all of the classrooms can enjoy the exceptional view of the park and the internal patio of the school complex.
The aim was a façade that would communicate lightness and elegance, offering minimal visual encumbrance whilst guaranteeing excellent acoustic and thermal insulation. For these reasons, we opted for the EKU 50 Glass system for mullion-transom façades.
The body of the building respects the alignment with the existing building behind it, as requested by the Superintendence, allowing the façade to be readable and identified. Pursuing the same objective, on the east side the recessed glazing elucidates the relationship between the new and pre-existing without the prior prevailing over the latter, in a respectful but linguistically legible juxtaposition.

Project sheet of the school complex