Eku Perfektion Alu and Eku 62TT aluminum systems were selected to restore the ‘trullo’ buildings of a ‘masseria’ (fortified farm) in Noci (Bari), a solution especially suited to meet the conservational and aesthetic needs of the operation. 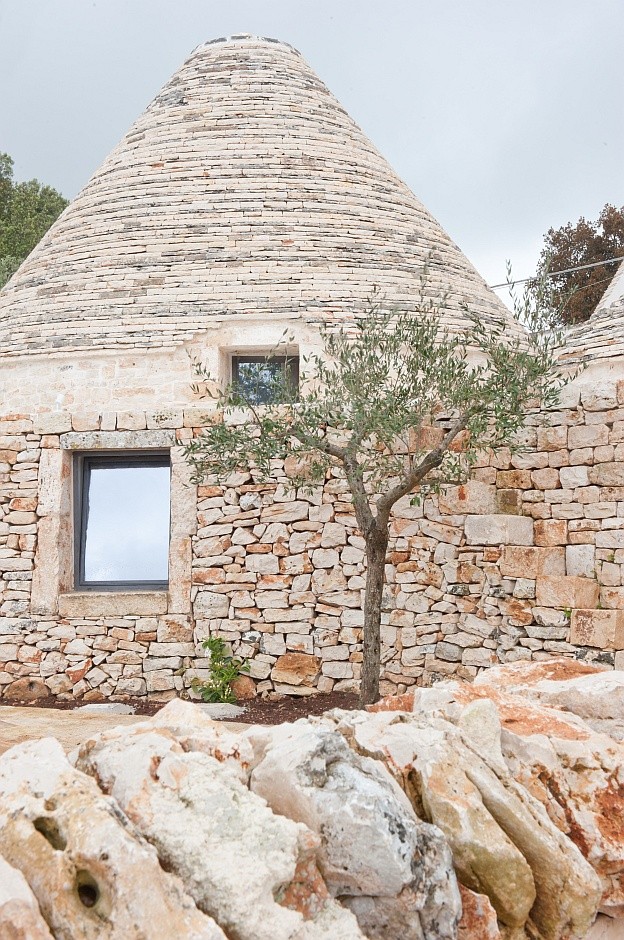 The project contextually coincided with the development of tourism in the Puglia Region. “Tourism seen also as an opportunity for foreign investors to generate wealth through real estate” specifies the architect Ferruccio Ciulli. “To allow the purchase of real estate properties and their subsequent restoration or redevelopment is an opportunity for growth that, I believe, goes hand in hand with traditional tourism”. In this particular case, the London-based clients purchased a ‘masseria’ (fortified farm) that had been built around an existing settlement of three ‘trulli’ (dry stone huts with conical roofs) dating back to the 17th century. Once the masseria had been built, another five ’trulli’ were erected in line, dating therefore to the 18th-19th centuries.

The conservative restoration of these ‘trulli’ was carried out by first applying for all the necessary provincial and landscape permits since Puglia has a punctual and precise PPTR (Regional Landscape Conservation Plan). “In the permit to build” Ciulli explains, “I did not apply for the authorization to add any volume really, for the creation of the technical rooms in which to place the heating and hot water production systems, etc.. From a conservational viewpoint, all of the existing cubic volume was to be preserved as it was originally”.

The two groups of trulli have different characteristics. The first and older one consists of ‘barn trulli’, dwellings also used as stalls. This meant that the farmers and their animals slept under the same roof. A smaller trullo was used as a tool shed. It is evident that the five trulli in line are more recent because their entrances are arched: this architectural element was introduced after the 17th century. 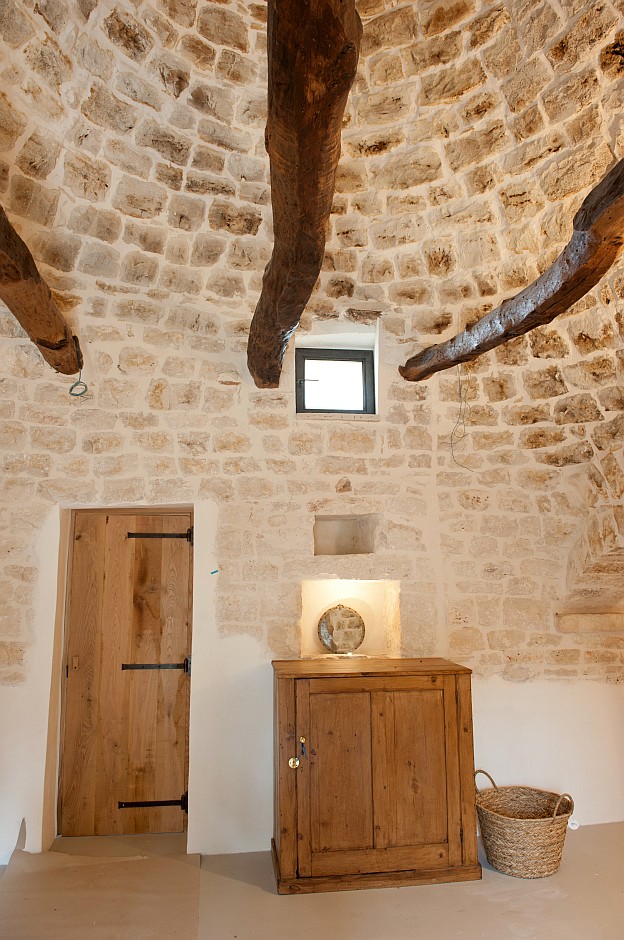 In the trulli in line that had quite wide entrances, fully glazed doors were made with arched frames, i.e. calendered, to follow the trulli’s original architectural style. All of the other windows were rectangular in shape. Care was taken to achieve sizes that respected the overall architectural composition of the buildings.

To ensure this result, all of the doors and windows were fitted with low-emissivity glazing, and in particular 33.1 low-E glass on the outside / argon gas gap / 44.1 glass on the inside, so as to achieve a thermal transmittance value Uw of 1.1 W/m2K. As regards soundproofing, there were no special requirements, but the result achieved was around 38-39 dB.

All of the systems have hidden hinges. The finishing colour of the frames is cast iron grey. The minimal design of the handles and their gunmetal grey finish perfectly blend in with that of the doors and windows. 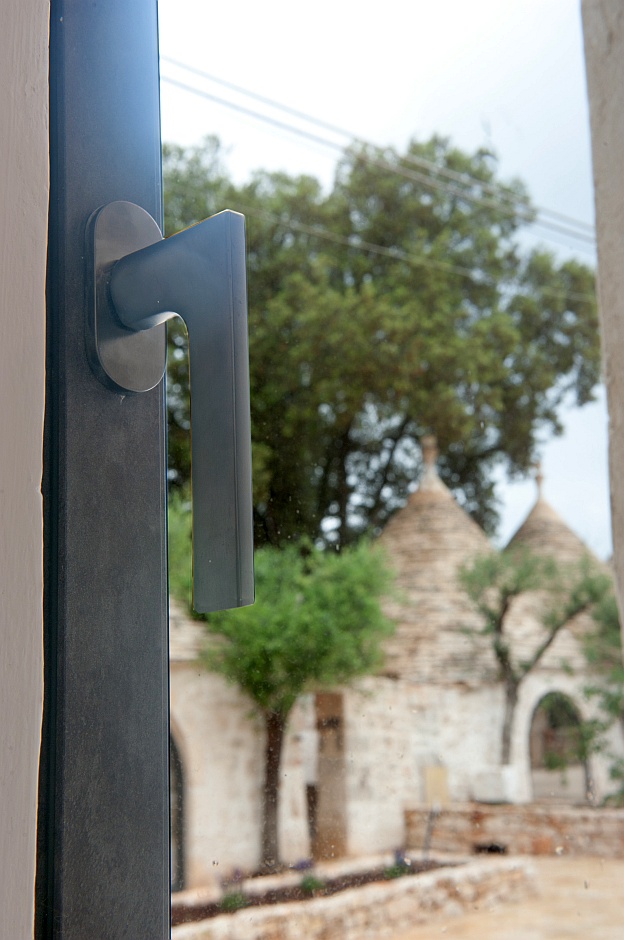 “During installation, we had to pay special attention to connecting the doors to these ancient stones” comments Giovanni Fusillo, the technical manager of the Officine Fusillo enterprise that built and installed all of the fixtures. “We had to adjust the doors flush with the stones without cutting or pitching any of the stones so as not to ruin their aesthetics. We were able to match the doors to the stone walls by sealing and finishing the inside and outside joints without cover strips or additional material, using only plaster or plaster-like silicone. The result was clean and elegant”.

Thermal insulation of the ‘trulli’

Each trullo has a washroom. In the older group it was possible to create the washrooms by ‘gutting’ the existing dry walls that are 3 metres thick. Then master ‘wall makers’, experts in building dry walls, created the necessary walls in such a way that nothing is noticeable from the outside except for the window that lets in the light for the washroom.

Thanks to the original thickness of the walls and to the type of fixtures installed, the thermal insulation of the trulli is perfect. The inside temperature remains constant. In summer it never rises above 18-20°C, and in winter it never falls below 16-15°C.

Because these buildings were originally built on the naked ground, a typical and rather important issue is the rise of humidity from the underlying soil. To solve this problem, specific crawl spaces containing ‘igloo’ formworks were created and used to install an underfloor heating system that solved this particular problem. 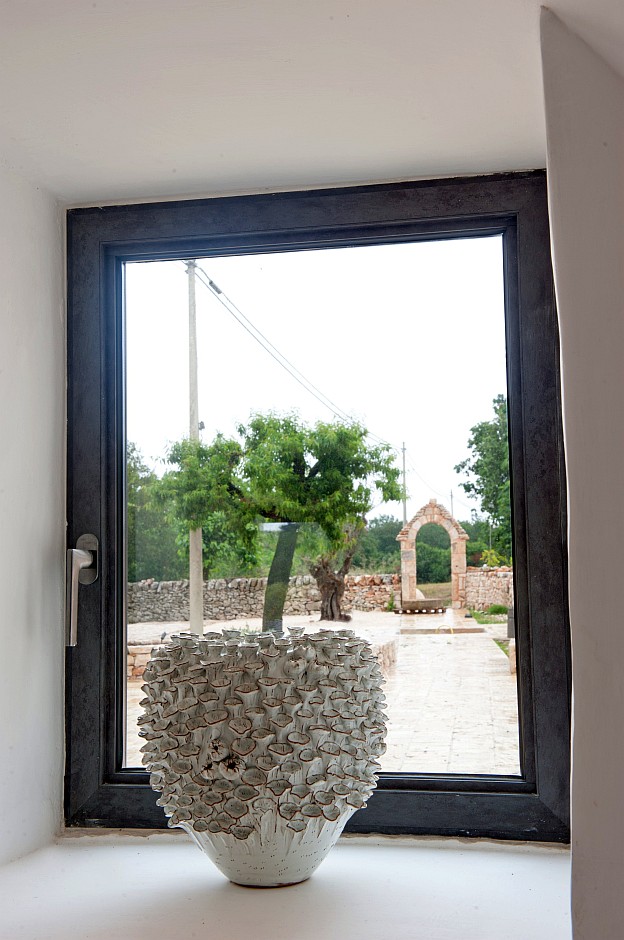 Finally, the ‘chiancarelle’, i.e. the special stones used to build the conical roofs of the trulli, were all removed and reassembled.

An ancient cistern was reproduced in the lower part of the masseria, to collect all of the water running off the approx. 2,000 m2 of stone-paved surface. It should guarantee the collection of about 300 thousand litres of water that, after suitable treatment, can be used entirely for irrigation, services and for the new pool.

“The pool will require constant replenishment in summer due to evaporation” the architect concludes. “The masseria will also be supplied by the rural aqueduct, but the supply would be insufficient. In this Region (Puglia), the use of well water is widespread. All of the masserias have a cistern for the collection of rainwater in the rainier months of the year, namely January, February and March. In these parts, water is a rare and precious asset”.

Summary of the project

Previous articleThe importance and value of an artisan’s mindset
Next articleCalculating the thermal transmittance of windows: the new radiosity method